Eastern turn for compasses for first time in 200 years as North shifts. 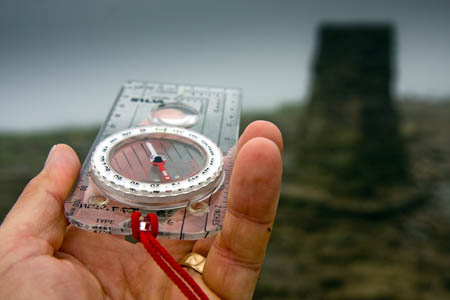 Walkers in the far South-West of England are experiencing a phenomenon not seen for more than 200 years.

For the first time since Ordnance Survey, Britain’s official mapping agency, came into existence, magnetic North has shifted to the East of the national grid North.

Generations of outdoor fans have grown up with the knowledge that, for accurate navigation using a compass, the housing has to be moved a few degrees to the West when using a bearing from the OS grid.

Now, in a small area of England west of Penzance, the grid magnetic angle is slightly to the East.

The reason is that the magnetic force that attracts a compass needle constantly moves and, in Great Britain, has been heading gradually eastwards for a few years.

This year, the variation in the Penzance area is actually nil – no adjustment is necessary – and in the far reaches of Cornwall there is a small eastward movement to make.

It’s the first time since the mapping agency was founded in 1791 this phenomenon has happened.

The magnetic figures are supplied to Ordnance Survey by the British Geological Survey and vary depending on whereabouts in Britain you are. Most of England, Wales and Scotland still has a variation to the West of the grid, but this is slowly diminishing.

Outdoor enthusiasts can get information on magnetic variations for anywhere in Britain by keying in their location on the BGS website.

The earth’s magnetic field variations are due to fluid movements in its iron-rich core.